Dog training has witnessed an enormous paradigm shift in the past few years. Whereas once the theories of using dominance to train dogs were widely accepted, now there is greater movement towards using positive reinforcement as a primary training method.

What is positive reinforcement? Let’s first take a look at what it is not:

Positive Reinforcement methods can be used to set appropriate boundaries with ANY dog.

Years ago, the primary accepted manner of training a dog incorporated the theory of dominance. This meant that dogs, as descendants of wolves and pack animals, only respected whomever was in charge, and that respect only occurred through harsh if not violent means. People were encouraged to use this fear-based training method in order to get their dogs to simply listen to them.

This theory has been widely debunked. First of all, the early dominance theory studies were only done with wolves – wild animals, not domesticated dogs. Most dogs and their owners do not have fights over resources: in fact, the most widely accepted theory states that the dog-human relationship evolved where  dogs provided protection for families in exchange for food. A symbiotic relationship developed where each had different roles and were not in competition.

The trouble with dominance theory is that it can create anxiety and aggression in a dog: you may have problems where there may have been none before. Furthermore, there is often a constant struggle since the causes of bad behavior are never addressed.

In contrast, positive reinforcement methods can lead to not only a well-behaved dog, but a relaxed one as well.

There are some misconceptions about positive training methods. It is not simply patting your dog after handing you his paw or doing something adorable. It is about rewarding good behavior immediately after it happens, and moving on to the next task. Bad behavior does not get a reward. If a dog does something that is not allowed (like counter surfing), then a strong “No” can be issued. After that, you may call the dog to you and if he comes when called, he gets a pat. (Probably not a treat, since counter surfing meant looking for food.)

Clicker training is a fantastic type of positive training. Clickers are very basic and inexpensive devices only asking for the owner to hold and push a button which elicits a click whenever the dog does something correctly. This can start with “sit” and move to other commands like “down,” “leave it,” “stay,” and so on. As soon as there is a click, the dog gets a reward: a pat, a treat, or a “good dog!” If there is bad or undesirable behavior, there will be no click and no reward. In that case, the dog’s attention needs to be back to what he should be doing so that positive reinforcement can be instilled once again. Eventually, the clicking fades and the behavior remains. Timing is key, and trainers will be sure to tell you not to go overboard or the dog will have you trained to give treats.

It is important to note that it is easiest to start using this method in a formal setting where you are not competing with other dogs, people, or squirrels for your pup’s attention. Slowly you can move to areas with more distractions while your dog learns that looking at you and listening to you are paramount.

Many of us live in communities that are very pro-rescue dogs. Hooray! All dogs deserve a good home. However, while most of these dogs are wonderful companions, there are some who have had early lives that have lead to aggressive behavior. This could mean a dog who starts a fight, or who finishes a fight, intense resource guarding, or fear-based barking.

If this is the case, we recommend finding certified professional trainers – if not behaviorists – with a strong background in positive reinforcement methods. These dogs can absolutely be helped. However, some dogs will take a bit longer than others. That’s perfectly fine. Patience and consistency are the best things you can provide for these pups. As long as they know that they are safe with you, they are on the path to improving their behavior.

High energy dogs can also benefit from positive reinforcement methods. Often these dogs appear to be naughty since they want to run and play without listening to their owner. In this case, the dog is looking for an outlet that they are not receiving elsewhere. They may need longer walks, or a longer back yard game of fetch. These dogs do not have the anxiety-level of a stressed, aggressive dog, but they need just as much attention.

Positive training can lead you to having a happy pet and a home free of stress. With a bit of effort, you can have a dog who gives you loose-leash walks instead of nonstop pulling, and a dog who goes into a crate willingly and happily – provided you are not using this as a punishment. We absolutely encourage positive training and hope that with some investigation you will find an appropriate trainer or school for your pup.

Ultimately, you can easily set boundaries for your dog, and your dog will be happy to learn what he is allowed to do. 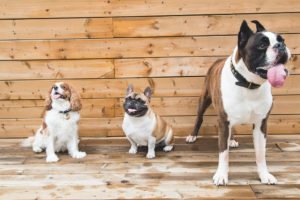